Birds are singing …. the sun is shining …. a glimpse of warmth creeps in after a long winter. Looks like it’s time to go outside and gather in some greens. “Gather in greens?!” you might ask

incredulously. You look around, it’s early spring, nothing is growing out there …. or is it?

For many today the thought of gathering in food in preparation for a meal means driving to the grocery store or the local vegetable stand or orchard. For some, a vegetable garden in their backyard helps to provide them with sustenance. But did you know that Yahweh has provided us with physical nourishment that we neither need to plant nor have to go to the corner market to purchase?

This “free” food is in the form of wild greens, herbs, and even flowers—and in the early spring when nothing else is growing, finding these wild “treasures” can be exciting.

One of these greens we’re going to consider here is wild watercress. While watercress can be found in the gourmet sections of some supermarkets, this vegetable also grows in the wild along running streams and creeks. Growing abundantly from mid-Feb­ruary onwards, watercress is best as soon as it appears until it starts to flower sometime in April. High in vitamin K (a vitamin known to help maintain healthy blood clotting), watercress can be cooked as a green or pureed into watercress soup. While cultivated water­cress can be eaten raw in such appetizers as cucumber and water­cress sandwiches, it is generally recommended that this fresh-water vegetable that is found growing in the wild be cooked before being consumed. As we all know, this earth is not as pure and pristine as it once was, and unless you are 100% certain as to the source of the watercourse, wild watercress should not be eaten raw. The water quality of the spring or creek in which it grows is very important since Fasciola Hepatica, also called the “common liver fluke,” is a parasite that can wreak havoc with the liver. Questionable habitats such as irrigation canals, roadside ditches, or city park streams should be avoided. A more ideal place to find wild watercress is in small, running mountain streams.

Another early vegetable to consider is the wild onion. Members of the wild alium family, these spring greens can be found in lawns, fields, and along roadsides. These green onion tops have a mild flavor similar to fresh chives, and can be used in much the same way as you would use cultivated onion tops or chives. There were quite a few occasions that these early greens flavored some scrambled eggs or enhanced a beef kielbasa entree after I discov­ered there were no onions in the pantry and it was too early for the chives to be cut. Early spring is the best time to cut these greens, as they tend to get stringy by summer.

Interestingly, this last wild spring green we are going to consider is regarded by many to be a weed. In fact, some people painstakingly attempt to eradicate this green—the seemingly ubiquitous dan­delion. But for some, this lowly plant offers much in the way of nourishment—from its tender leaves used in a salad, to its yellow flowers used for making wine or sautéed and dipped in batter and fried for fritters, to its gnarled root used as a medicinal tonic. 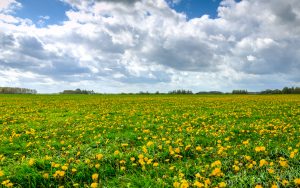 The leaves should be picked as early as possible, since by the time the flowers start to appear, these tender greens have already begun to get bitter. These leaves are extremely nutritious, providing more beta-carotene than carrots, as well as a phenomenal content of iron and calcium.

Sometimes dandelion greens are cooked in a small amount of salted water, then drained and added to sautéed onions and garlic and seasoned with salt, pepper, and parmesan cheese. At other times they are fried with garlic in olive oil until wilted and tender-crisp, and then combined with dried fruit or toasted nuts. And yet at other times, these dandelion greens are eaten raw, tossed in a salad with sliced apples, sharp cheese, and toasted walnuts, or with a dressing poured over them.

The dandelion dressing below is much like the one my mother made almost every spring when I was growing up. The sweet/sour dressing helps to overcome the slightly bitter flavor of the dande­lion greens.

Remember to gather any of these greens as early as possible, as they all start developing a bitter flavor the further along in the sea­son that they are harvested. Also remember when picking any wild food, to be absolutely certain they are harvested from areas where pesticides or fertilizers have not been sprayed, or anywhere they could be contaminated with any form of pollutant.  Joyous eating!

Wash the dandelion greens and spin dry. Place the greens in a large serving bowl. Slice the hard boiled eggs. Lay the egg slices on top of the greens. Set aside. Fry the turkey bacon until tender crisp, then break or cut into bits. Set aside. Mix the 2 beaten eggs, vin­egar, salt, sugar, and cornstarch together in a saucepan. Whisk and cook over medium heat until slightly thickened. Stir in the turkey bacon bits. Pour the warm dressing over the salad and serve im­mediately.