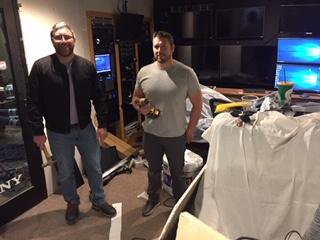 Control Room Gets Makeover for Enhanced Operating
We are remodeling the control room used for video programs and live Sabbath service broadcasting. The renovation will give our faithful volunteer technicians better ease and efficiency in operating the many electronics packed into the small space. Along with these improvements we plan to resume producing Discover the Truth programs and create more videos for 24-hour broadcasting on the YRM Network. Stay tuned for exciting news in future reports.
Last Days Revival in Progress
As the world sinks deeper into secularism we see a corresponding rise of interest in the Truth coming from nominal worship. An online blog reported that an Assembly of God pastor said most of his congregation began keeping the Sabbath and Feasts. “Apparently there are a number of AoG congregations that have begun to take all of G-d’s Word seriously,” the blog noted, including 100 Southern Baptist missionaries who “walk as Messiah did, keeping Sabbath, eating clean and keeping Feasts,” including several pastors who made the switch in the last year. Now if they would just complete their calling and worship in Yahweh’s personal Name!
TEST YOUR TUTELAGE
Who was Moses’ undertaker?

The death and burial of Moses is unique in Scripture. Because of his sin at the waters of Meribah Kadesh, Moses was allowed only to gaze at the Promised Land but could not enter it, Numbers 20:12. There on Mt. Nebo he died and Yahweh buried him somewhere in a secret location in a valley of Moab, Deuteronomy 34:5-6. Because of Israel’s penchant for idolatry, this was probably to keep them from making his gravesite a shrine. Curiously, Satan disputed with the archangel Michael over the body of Moses, Jude 1:9. Speculation swirls over the nature of the contention. The context indicates that Satan may have been accusing Moses, saying that because of sin Moses did not deserve a kingdom position, let alone to enter the Canaan. Satan is the accuser of the brethren, Rev. 12:10. But Psalm 116:15 says, “Precious in the sight of Yahweh is the death of his saints.”