espite the fact that nearly all credible scholars and biblical references confirm and use “Yahweh,” there are still those who insist on using the “u” in the Name, i.e. Yahuah or Yahueh. Typically, those who employ the u form tend to over-emphasize the sound of the u as well—Yah-OO-ah (or -eh). The letter in question, the waw and third letter of the Hebrew Tetragrammaton, is represented by the W. The development of the letter U shows a late progression. The American Heritage Dictionary says that the W came to be pronounced as a V in later Latin (proof that “Yahveh” is historically impossible). Then this source says under the letter U, “The letter U originated in the early Middle Ages as a cursive version of V.” The w (waw) in biblical Hebrew is a weak letter. The w even drops out in some English words like sword, wrong, wrap, law, wrench, two and wrinkle. The waw is almost a guttural, and is nearly swallowed in biblical Hebrew, the opposite of over-emphasis given by some to the u (oo) sound. Who pronounces “answer” as “ans-OO-er”? In the book How the Hebrew Language Grew, Edward Horowitz, pg. 29 explains how many English words with the equivalent letter ‘w’ is silent and follows the same pattern as the Hebrew “waw.” Examples include, “answer, sword, law, two, write, etc.”  “…the sound of w a long time ago wasn’t “vav” at all but “w” and “w” is weak…The Yemenite Jews of Arabia who retain an ancient, correct, and pure pronunciation of Hebrew still pronounce the w as “w” –as does Arabic, the close sister language of Hebrew,” pp. 29-30.

The main argument for Yahuah is that the name Judah (Yahudah) holds the key to unlocking the truth of the father’s name. The tetragrammaton contains the Hebrew letters (Yod Heh Waw Heh) and the name of Judah (Yod Heh Waw Daleth Heh.). Now (according to them) simply remove the Daleth and you have the pronounciation. This is indeed poor scholarship, if you can even call it that. To formulate a pronounciation by using two different Hebrew words that have similar letters is naive and linguistically not very sound. In Hebrew you can have words that are spelled exactly the same but are pronounced differently. The word שאול, “Shaul” (King “Saul”) is spelled exactly the same as שאול, pronounced “Sheol.” “Shaul” means “desired” but “Sheol” means “grave.” The vowels are different, but the word is spelled exactlty the same.

Another argument for the “ah” ending is that if the sound of the first hay is “ah,” the second hay must be the same sound. The same letter often takes on a different sound when appearing twice in the same word. For example, the “a” in always is not the same sound at the beginning of the word as it is at the end. Just because words are related in their roots is no justification for manufacturing a word or name by combining variations and should be disregarded as poor scholarship. The Berlitz Hebrew Self-Teacher on page 73 reveals: “There are, however, four letters which can be used as vowels. h and a may have the vowel sound of ah or eh, w that of oo or oh, and y of ee or eh.”

The Greek shows that the last syllable is pronounced with a short “e” sound: ee-ah-oo-eh like Theodoret’s Iabe. There is Iaoue from Clement of Alexandria. An interesting extra-biblical find is the Nag Hammadi Apocryphon of John (written by Gnostic Christians). Since it was known to the church father Irenaeus, it is estimated to have been written 120-180 CE. In the text we find the name “Yawe” occurring alongside Eloim.

The Encyclopedia Judaica notes that the true pronunciation of Yahweh’s Name was never lost, being pronounced “Yahweh.

I was not at all trying to be disruptive or disputations, Friends. I simply believe what I’ve read from reliable sources that the Masoretes changed the vowel points so that people would not be able to continue to pronounce the Divine Name in an unworthy manner. An example was given to confirm this view, showing the Old Hebrew letters for Elohim to actually be correctly rendered Alahim. It was said that the remnant that returned from Babylon brought back Aramaic, the lingua franca, language of commerce in the area. Also it was pointed out that the J & the W… Read more »

Dearest brother, I really appreciate that you have taken the time to try and explain the origin and pronunciation of our fathers name. It is so difficult to find a concrete answer to anything these days. Our father YaHUaH’s children are genuinely trying to seek his Truth, so that we may follow him and glorify him, as he is the whole point of our existence, otherwise why else would we be here. I only want to please him and not man, so don’t understand why anyone would criticise a brother over anything other than a sinful life. You message is… Read more »

I learned that there is no letter W in Hebrew, so it could not be Yah(W)eh. What makes Yahuah wrong? It has the Yah and all the correct, existing Ancient Paleo-Hebrew letters.at the time His son walked the earth and before.Yahushua comes with the Yah for His Son’s name. Is not Yahshua the Hebrew name for Joshua? His name is not Joshua. Where does the Tetragrammaton originate from? If it is from the Greeks, in my opinion, it will not be reliable because the Greeks are the ones with pagan gods (among other religions). I may or may not have… Read more »

There is no doubt the W is present in ancient Hebrew it is verifiable fact. We have reached out to the worlds foremost Hebrew experts and they have all agreed that the “Waw” was pronounced as W anciently. The only Semitic language WITHOUT a W for the 6th letter is Modern Hebrew. We recommend Zondervans videos on Ancient Hebrew. https://zondervanacademic.com/blog/introduction-hebrew-alphabet The Tetragrammaton is not Greek it is Hebrew. it is found in the dead sea scrolls in Hebrew. While the term “Tetragrammaton” is Greek (It means 4 letters), the 4 letters that make up Yahweh’s name has been around since… Read more »

Shalom, One should first learn the language; fully become proficient in the qodesh Hebrew language, before teaching others. The Name of our Elohim is too qodesh for your opinions and fancy guesswork. You clearly do not speak, read or write in any of the Hebrew languages as you have presented much misinformation. We therefore do not qualify your opinion on “what is”, or “what is not” scholarship, let alone what is true. The First clarification is please comprehend that there are multiple Hebrew writing scripts which will each produce similar but different phonic sounds for each Hebrew syllable and word.… Read more » 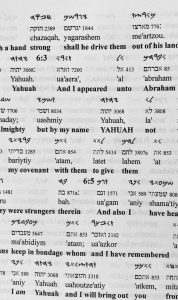 “You clearly do not speak, read or write in any of the Hebrew languages as you have presented much misinformation.” We have taken a accredited Biblical Hebrew class for several years now, taught by PhD. Miles Van Pelt. We can speak, read and write Biblical Hebrew. We have reached out to the worlds foremost experts in the Hebrew language, we have exchanged E-mails with some of the top Biblical Hebrew scholars in the world. “Classical Hebrew and Modern Hebrew ” The Nikkud does not change between the two, Beyond a few minor differences, non of which would affect this discussion.… Read more »

i also noticed that when shooting down the name Yahuah there are usually lots of references to the english language and dictionaries. this may be a case of what I call “The Unicorn Effect”. Unicorns are mentioned several times in the bible. The text, as far as I understand, is referring to a one-horned animal much like, if not, the one-horned rhinoceros. Only a few hundred years ago this would have been the only understanding that anyone would have had of the unicorn text. Even webster’s early dictionaries spoke nothing of the horned rainbow riding horse but instead a unicornus… Read more »

What about the name of Jesus in hebrew? Is it Yeshua, Yahshua or Yahushua?

Thanks for chirping that in as crucial as it is. However please, why is no one just talking about Yahweh Ben Yahweh? I mean, he showed up way before general knowledge on hidden bible truths began to surface. He actually nullified Yahushua as being the Messiah, but really why is he just in so much oblivion and neglect? Anyway well done to you. I just we attain the ultimate truth as it shall only set us free.

What gave me the idea of using that “u” in Yahweh is that many prophets had that “u” in their names: EliYahU, YirmeYahU, YeshaYahU, ZekarYahU, YahUsha, YahUdith, etc. If His name DIDN’T have that “u” then why did many prophets like the ones mentioned above also carry that “u” for the longer versions of their names? So, it seems it wasn’t just “EliYah,” (El is Yah) it was also “EliYahu,” (El is Yahu) too. It makes sense to me why the “u” would be included for Yahweh: “Yahuweh.”

@David White Yes, that’s a very good point I’ve thought about too because YHWH always does everything in cycles of 7–so why would he have a name with only 6 letters? I’m just wondering because, according to Relelation, 6 is a number of a man and Yahweh has only 6 letters. His son’s name, Yahshua, has 7 letters–so why would the Abba’s name not also have 7 letters? I believe the Akkadian Tablets also testify to ‘Yahu’ which, to me, says is could be ‘Yahuweh’. In any case, it’s definitely not ‘Yahuah’ and YRM does have that correct.