Is it possible that with every breath you take you are breathing the name Yahweh? It has been said the Jewish sages associated the name with breath. The uniqueness of this two syllable form YaH-WeH can indeed be breathed, try it. Inhale “Yah” and exhale “weh,” or you can exhale Yah and inhale weh. The yod, heh, and waw (which make up the Tetragrammaton) are semivowel letters in Hebrew, commonly called matres lectionis, from the Latin “mothers of reading” and are consonants that are used as vowels. In Biblical Hebrew they are used for the unchangeable vowel combinations in Masoretic vowel pointing. 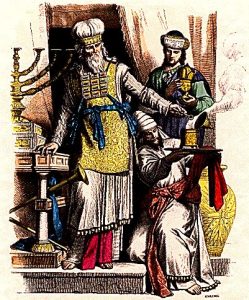 Ancient Jewish historian Flavius Josephus backs this up in his description of the inscription on the miter of the high priest: “A mitre also of fine linen encompassed his head, which was tied by a blue ribbon, about which there was another golden crown, in which was engraven the sacred name: it consists of four vowels,” The Wars of the Jews, 5.235. Could Josephus be indicating the name is an onomatopoeia (formation of a word from the sound associated with it)? I’m pretty convinced he is. I am also convinced they considered yod, heh, and waw as matres lectionis and I believe the Hebrew tells the story.

Vowels are spoken with the open mouth and to inhale and exhale air you must open your mouth. It is no accident that the Tetragrammaton is made up of semi-vowel letters.

Yahweh told Moses in response to his question, what shall I call You, in Exodus 3:14 said: “I Am that I Am.” I Am is from the verb of existence HaYah in Hebrew, which means to become, come to pass, as well as sustain. His name is attributed to life. Our very sustenance is the air we breathe. Maybe this is why David wrote: “I will bless Yahweh at all times; His praise shall continually be in my mouth.” Psalms 34:1. To breathe is the very essence of life. Yahweh’s Holy Spirit is called the Ruach HaKodesh in Hebrew. Ruach literally means breath, wind or spirit.

twice in the text. The final heh in Yah contains a mappiq dot indicating the heh is to be pronounced as a full aspirated consonant “YaH,” rather than just the qamets vowel “Ya,” adding the breathy “h” sound to Yahh.

Many rabbis know the importance of the Tetragrammaton YHWH in relation to breath. The Jewish prayer book, the Siddur, teaches, “Nishmat kol chai tivarekh et-shimcha, YHWH elohenu” — “The breathing of all life, praises your Name, YHWH our Elohim.”

This is yet another proof of why the simplicity of the two-syllable name Yah-weh is authentic and why so many of the complex three-syllable variations cannot be breathed. In Genesis 2:7 Yahweh breathed into Adam the breath of life and made him live. “Nishmat khayyim (breath of life).” Khayyim is represented in the popular Chai symbol of the two Hebrew letters Het-yod, popular among Jews in the land of Israel and worn as necklaces symbolizing life.

Recall the phrase in the movie Fiddler on the Roof: “to life to life l’chaim.” In Jeremiah 23:36 we see the Hebrew phrase “Elohim khayyim Yahweh sebaowth Elohenu” or “Elohim of the living, Yahweh of Hosts our Elohim.”

Pronounce the tetragrammaton the way it is written: YHWH. Notice you can actually pronounce the name with just the four letters. It really is quite amazing! You really don’t even need the vowels to say the name. This is the beauty of these aspirate consonants that make up the name and how fascinating Yahweh’s name really is. From the first man Adam till now, no matter your religion, if you believe in the Bible, or an Atheist, the name of Yahweh will be on every ones lips until your last breath.