I enjoyed your video on the Temple Mount, but definitely disagree as scripture makes it clear that Solomon’s temple was built on Mount Moriah (2 Chronicles 3:1) and not in the city of David. This video was very convincing until going to scripture. The Temple Mount is the site of the temple as the Jewish people confirm and scripture is 100% clear that the temple was built on mount Moriah, which is what we call today the Temple Mount. Still worth watching, but go to the Bible and you will see what they say in this video is not correct. (This was in response to the Lost Temple Mount video)

Thank you for your comment. We believe the Bible confirms that Mount Moriah is within the City of David and not on the traditional Temple Mount. Mount Moriah is mentioned in 2 Chronicles 3:1: “Then Solomon began to build the house of Yahweh at Jerusalem in mount Moriah,

This passage identifies that Mount Moriah was within the ancient city of Jerusalem and at the location of Ornan’s threshing floor. Modern archaeology has verified that the Jebusite city (and the original City of David) was limited to the 12-acre crescent-shape hillside south from the traditional Temple Mount. Today this location is called City of David National Park (also called Jerusalem Walls National Park). The Jerusalem of today, including the Temple Mount, did not exist under David or Solomon.

There was one change under the reign on Solomon regarding Jerusalem proper. The Bible records in 1 Kings 11:27 that Solomon filled in the Millo and by so doing, connected the City of David with the Ophel. When this occurred, the Ophel became part of the City of David. We got the chance to view the Millo during our last trip to Israel.

According to scholars, threshing floors were susceptible to theft. Therefore, besides the fact that 2 Chronicles 3:1 confirms that Mount Moriah was within the ancient city of Jerusalem, it is highly unlikely that Ornan’s threshing floor would have been unprotected on the traditional Temple Mount, not to mention a third of a mile away from the Jebusite city.

In addition, the Bible is clear that Zion is where the Temple was located.

We find that Zion is synonymous with the ancient City of David.

Based on these facts, we believe the Bible and archaeology confirms that the ancient City of David was limited to the 12-acre plot of land a third of a mile south from the traditional Temple Mount and that Mount Moriah and Mount Zion were both located within the City of David, possibly on the Millo that Solomon filled in and expanded.

From my perspective, the biggest hurdle for the traditional Temple Mount being the location of the temple is the prophecies and historical accounts of the temple’s destruction and the existence of Fortress Antonia. Josephus writes that the only thing that remained after Titus destroyed Jerusalem was the monument of the Romans, i.e., Fortress Antonia. The only ancient monument remaining from this time is the foundation and walls of the Temple Mount.

According to the historian Eusebius in Proof of the Gospel, Jerusalem, along with the temple, was so utterly destroyed that it appeared as Sodom, i.e, nothing remained: “Their ancient holy place, at any rate, and their Temple are to this day as much destroyed as Sodom” (Bk. V, ch.23, sect. 250).

Check out Part 1 of Pastor Randy’s sermon on the Temple Mount:

[…] Q&As Doesn’t the Bible confirm Mount Moriah is located on the Temple Mount? Do you agree that the KJV is […]

Also consider that a threshing floor must be a flat area and typically found near the side of a hill where wind would naturally drive off the chaf. And abundance of water is a critical requirement for the temple location. Josephus also states that if one had not known the city of Jerusalem was there, they would not know it after the destruction in 70 a.d. this is because the fire melted the gold in both the temple and the city residence savings hid in their walls. So much gold was recovered that the value of gold was greatly diminished… Read more »

Also, huge walls remain to this day. Why? Because it was the Roman Fort Antonia (so called Temple Mount) which had colonnades outside its walls leading to Yahweh’s temple. A logical explanation. the rest of the city of David or Jerusalem was totally destroyed in search of gold.

Apart from the convincing historical, biblical, and archaeological evidence, we have the testimony of simple common sense – Who in their right mind would construct a magnificent and highly sacred Temple to God (covered in gold, and housing stores of immense treasures) OUTSIDE the protection of the city walls? Certainly not Solomon, the wisest king who ever lived…

Dear Brother Coen, Here is an excellent reason to site your temple outside of town: it stinks! Not only that but the noise and the waste (of all kinds) would have been prodigious. The temple had its own security fence, of course, but the king would not have had to deal with the daily annoyance of all those animals. That being said, the Haram is an unlikely place for the temple. How about Ammunition Hill? Ever wonder what those “trenches” were originally for? They look like animal chutes to me. And just down the hill from Mt Scopus, where the… Read more »

Mount Moriah was the name of the entire ridge from north of Dome of the Rock, all the way down south Kidron Valley past the Pool of Siloam, not a single peak, like Mount Zion. Thus Mt. Zion is in the middle of Mt. Moriah. 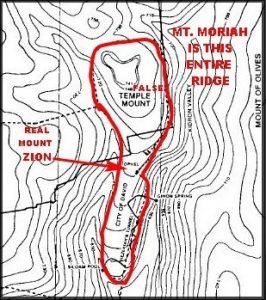 Mt. Zion was cut down by the Hasmoneans. In the time of Simon the Hasmonean, the current temple mount was not the highest mountain. Mt. Zion is where the Temple was located. The Temple was Desecrated by Greeks during the time of the Maccabees. Simon the Hasmonean decided to remove Mt. Zion. He leveled the land and threw it into the Tyropoeon and Kidron Valleys. He filled up the valley with the earth and wanted to join the upper city with the Temple. The name Mt. Zion was transferred to the western hill and the city expanded to the west.… Read more »