On the first day of the Feast of Tabernacles the priests would bring up to the temple a golden container of water from the pool of Siloam in a great ceremonial procession. This water will last all seven days of the Feast. On the seventh day this water libation ceremony reached its apex. Temple priests circled the altar seven times and poured out the water on the altar. For seven days the people would cry out for redemption and salvation while shaking palm branches.

This day is traditionally called Hoshana Rabba. According to the Mishnah (Sukkah 4:5), they would gather willow branches and encircle the altar once a day and stand the branches upright at the sides of the altar, sounding the shofar and reciting: “Hoshiah na! Save us, please!”

Rabba in biblical Hebrew means “master” or “great” and hoshana has the meaning of rescue, save, deliver, or savior. The title Rabbi comes from this term רַב Rab. Yahshua prohibits calling a man Rabbi because only Yahshua Messiah is our “master.” “But be not ye called Rabbi: for one is your Master, even Messiah.” Matthew 23:8. Interesting note: the Assyrians (who spoke Aramaic) called their chief military leader the רַבְשָׁקֵה Rab-shaqeh. The title “rab” is well attested in Aramaic, which Yahshua spoke.

Regarding Hoshanna Rabba The Jewish Virtual Library notes: “In Second Temple times this was a source of controversy between the Boethusians and the Pharisees who gave the ceremony biblical authority even though it is nowhere mentioned in the Bible. They considered it to be halakhah le-Moshe mi-Sinai, i.e., as having been instructed verbally to Moses during his stay on Sinai.” See reference

Although not mentioned by name, this event seems to correlate with the prophetic Messianic Psalm 118:22-26: “I will give you thanks, for you answered me; you have become my salvation. The stone the builders rejected has become the cornerstone; Yahweh has done this, and it is marvelous in our eyes. Yahweh has done it this very day; let us rejoice today and be glad. Yahweh, save us Yahweh. (הוֹשִׁ֘יעָ֥ה נָּ֑א Hoshia na – save now) grant us success! Blessed is he who comes in the name of Yahweh. (Prophetic reference to the Messiah who came in Yahweh’s name and is Salvation Yah-shua.) From the house of Yahweh we bless you. Yahweh is our Elohim, and he has made his light shine on us. With boughs in hand, join in the festal procession up to the horns of the altar.”

When we analyze the biblical Hebrew an interesting correlation appears. The word “save” in this verse is from the Hebrew root word יָשַׁע yasha, “to deliver,” the same word origin in the name contraction of Joshua or Yahshua (3091), from YHWH and Yasha (See Yasha Strong’s 3091, Biblehub). 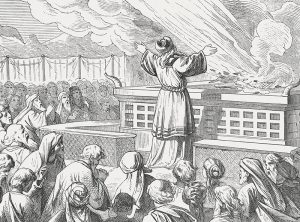 So Yahshua is standing at the Temple on the seventh day of Sukkot as the people cry out for salvation for the coming Messiah to deliver them, as they have traditionally done for hundreds of years. In a prophetic and emotional display, with the crowd waving palm branches, the priests circle the altar seven times, and pour out the water on the altar. And then Yahshua cries back in a loud voice so all the crowd could hear Him: “If anyone thirsts, let him come to Me and drink,” John 7:37.

Continuing in verse 40, “When the crowds heard him say this, some of them declared, “Surely this man is the Prophet we’ve been expecting.” Others said, “He is the Messiah.”

Jews believe this day is also a day of judgment similar to Yom Kippur. An interesting note from the Jewish Virtual Library gives this insight: “The celebration of Hoshana Rabba acquired considerable solemnity and religious-mystic significance. In Jerusalem a large gathering took place on the Mount of Olives which was circled seven times … The piyyut (poem) of Hoshana Rabba which opens with the words, ‘the power [or, the truth] of Thy salvation cometh,’ which deals with the splitting open of The Mount of Olives (Zech.14:4) and the resurrection of the dead, probably has its origin in this ceremony.” See reference

Could it be that Tabernacles, as a harvest festival, also signifies the general harvest of the Firstfruits spoken of in Revelation and the return of the Messiah? Yahshua was born during Sukkot, he answers the call of salvation during Sukkot, and His people are gathered  from the world at this time. “Then I looked, and there before me was the Lamb, standing on Mount Zion, and with him 144,000 who had his name and his Father’s name written on their foreheads.  And I heard a sound from heaven like the roar of rushing waters and like a loud peal of thunder.”

The Talmud mentions that during Hoshana Rabba, poems are recited calling upon Yahweh to not only rescue and redeem but also to send seasonal rains.

Water is an important element during Hoshana Rabba. Zechariah 14:17 warns of no rain for those who will not keep this festival after the return of the Messiah: “If the Egyptian people do not go up and take part, they will have no rain. Yahweh will bring on them the plague he inflicts on the nations that do not go up to celebrate the Festival of Tabernacles.”

The importance of keeping Sukkot cannot be overstated. It is a pilgrimage festival which means you are not to stay home to keep this Feast but travel where Yahweh places His name. These Messianic prophecies culminate in a general Harvest of Firstfruit believers gathered as a wave sheaf that Yahshua will offer to Yahweh at His return as our High Priest. Just another important reason to keep the Feast!