What will happen to the semi-serious dabbler in the Word? Can he go just halfway and still believe a Kingdom reward awaits him?

Even with today’s widespread decline in church turnout, millions still attend church regularly. There they can get warm and fuzzy from featherweight sermons about a girl and her puppy or how they can become personally prosperous.  The more serious-minded believers want substance to strengthen their faith, so they pick up the Bible and read it.

Then there are those who faithfully study the Word with purpose. They understand the necessity to align their lives with what they learn from the Scriptures. This conviction was more common before psychology invaded church pulpits, replacing powerful teachings of Yahweh’s Word with useless fluff that glorifies the worshiper.

We are seeing fulfillment of what Paul prophesied: “Who changed the truth of Elohim into a lie, and worshiped and served the creature more than [rather than] the Creator, who is blessed for ever,” Romans 1:25.

Modern Worship – Rewarded for Nothing?

Today’s Gospel-lite messages have created a vast contradiction. Despite his shallow comprehension and anemic dedication to the Scriptures, the nominal worshiper still expects a salvation reward. Even the fellow who has a hard time just locating books in the Bible believes he will be among those saved at the end.

All would do well to heed what Yahshua said in John 5:39: “Search the scriptures; for in them ye think ye have eternal life: and they are they which testify of me.”

Many see no connection between studying the Word, changing their lives, and being found worthy to serve Yahweh in the coming Kingdom. Yet, that’s the main thrust of Yahshua’s teachings as well as those of the prophets and apostles.

Yahshua defined the terms of salvation when He said, “Not every one that saith unto me, Master, Master, shall enter into the kingdom of heaven; but he that does the will of my Father which is in heaven,” Matthew 7:21. He Himself did the will of His Father, and so must all who expect eternal life, 1Peter 2:21.

Also, John wrote, “And the world passes away, and the lust thereof: but he that does the will of Elohim abideth for ever,” 1John 2:17.

Many believe they are justified in their anemic commitment to the Word. Flare has left fervor in the dust. Yahshua speaks directly to this delusion in Matthew 7:22-23:

“Many will say to me in that day, Master, Master, have we not prophesied in thy name? and in thy name have cast out devils? and in thy name done many wonderful works? And then will I profess unto them, I never knew you: depart from me, ye that work iniquity.”

Iniquity is the Greek anomia and means unrighteousness, specifically defined as violation of Yahweh’s laws. Those who won’t learn and obey the commands of Scripture are separated from Yahshua in a state of anomia.

On the other hand Yahshua said, “Therefore whosoever heareth these sayings of mine, and doeth them, I will liken him unto a wise man, which built his house upon a rock,” Matthew 7:24.

Have you ever wondered what Yahweh will do with the tens of millions who claim a belief in the Bible, go to church regularly, and consider themselves saved – but who never dig below surface level to really understand and conform to the Scriptures?

Relatively few understand His covenant contract with the called-out ones anciently as well as with us in the New Testament. It includes adherence to all that Yahweh commands and all that Yahshua taught.

What will become of those who refuse to call on His personal Name, even when He commands it and they know it is right? What about those who ignore the Sabbath, which He ordained at creation as a memorial of His miraculous work?

Nowhere in the Word are we allowed to disregard His annual Feasts days and celebrate the useless worldly holidays instead. But that is what most in Modern Worship choose to do.

It is time for some clarity as to how Yahweh deals with the religious hobbyist, the part-timer, and the semi-involved dabbler who firmly believes that he or she will one day eat from the Tree of Life and live forever.

Years ago an inquirer raised this very issue. He said he didn’t understand the spiritual line of demarcation. He was confused about those morally decent people who say they believe, and profess to be guided by the Bible, but in reality don’t follow even the basics. Will they be gathered with the saints at Yahshua’s coming?

If everyone ends up at the pearly gates anyway, as churches teach or imply, then it would have been pointless for Yahshua to teach conformity to Yahweh’s teachings.

Indifference to personal compliance is at the root of the negative G-force holding millions down and smothering any desire to dig into the Scriptures. They have been told that they already have salvation, so why worry about the details? Just have faith.

Yahshua taught that the walk of 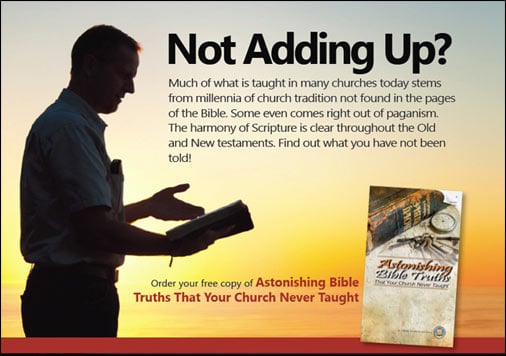 truth leaves no room for fuzzy faith. In both Matthew 4:4 and Luke 4:4 He clearly told us how to live, “Man shall not live by bread alone but by every word that proceeds out of the mouth of Yahweh.” What proceeds out of Yahweh’s mouth are His laws and precepts meant for believers in all eras. It’s that simple.

Yahshua Himself followed them and His example of obedience is for us.

Two key passages, 1Peter 2:21-22 and 1John 2:5-6, require us to follow Yahshua’s model of obedience to the laws of Scripture. Peter wrote that Yahshua was sinless, meaning He observed His Father’s statutes perfectly, 1John 3:4.

The believer is to conform to the image of Yahweh’s Son, Romans 8:29, so that the True Worshiper might be among the first to be born into the Kingdom.

Professing faith is useless unless His Word is applied directly to our lives. James 2:20 reads, “But wilt thou know, O vain man, that faith without works is dead?” What we do in life has eternal consequences. We find in Romans 1:5 that obedience comes from faith (NIV). Paul in Romans 16:26 melded the two concepts when he used the term “obedience of faith.” He wrote in Romans 2:13, “For not the hearers of the law are just before Elohim, but the doers of the law shall be justified.” Note that verse in light of those who argue against obedience: “For as many as have sinned without law shall also perish without law: and as many as have sinned in the law shall be judged by the law.” This is Paul speaking in the New Testament.  Complete submission is a command, not only in statute but also in applying Yahshua’s same compassionate and faithful living of those laws.

The biggest obstacle to the walk of Truth, besides our own nature, comes from the pressures of those closest to us.

Family pulls and coercion from friends cause many to compromise their walk and play both ends against the middle. They believe that they can still please everyone, Yahweh included.  Take honoring the Sabbath command, for example. Many in Modern Worship see room there for fudging. Let’s say there is a game Friday night at sunset and friends want you to join them, or the relatives are having a picnic Sabbath afternoon and have asked you to come instead of attending worship services. Your sister or brother from out of town is visiting on the Sabbath and it may be your only time to see them. Do you join in and put Yahweh at the end of the line?

Or maybe a weak-in-the-walk spouse wants to celebrate the worthless worldly holidays and expects your participation with the rest of the family – or face unpleasant backlash. Do you compromise, or have the courage of your convictions?

Yahweh sees it all

The very early New Testament believers were dedicated to their faith. They clearly understood what it means to follow Yahweh. But a few centuries later all that started to change – leaving us with the sad state of today’s Modern worship. The first major departure came with the Sabbath. The Sabbath is usually the first focus of fracture when it comes to waning commitment and apostatizing. Read this eye-opening excerpt from the Encyclopedia of the Lutheran Church, the people who once knew a lot about change and reformation.  Under the heading “Sabbatarian” we find: “The Jewish-Christian congregations of the first century observed the Jewish Sabbath regulations without any hesitancy. Occasionally we meet a dual emphasis upon both Sabbath and Sunday (e.g., in the eastern part of Christianity in the fourth century and in Christian Ireland in the sixth century).” This denomination that split with the Roman church knows that the early New Testament congregations faithfully observed the Sabbath and not the first day of the week, which was still the case several centuries after the death and resurrection of Yahshua. Many who could not completely accept switching over to the first day of the week compromised by keeping both days. For them there were two Sabbaths in a week, a direct violation of the Fourth Commandment in Exodus 20:9-10.

What most fail to grasp is that Yahweh made a unilateral agreement with Israel. He called it a covenant: if you obey my voice and live your life to honor me, then I will be your salvation. Either get on board or be left by the wayside. And that agreement remains intact in today’s New Testament.

The covenant agreement Yahweh first made with Israel will find its fulfillment when Yahshua returns and marries His bride, the Assembly. It’s a promise going all the way back to the beginning. Yahweh is calling many today to leave trivialities behind and get serious about conforming to the Word. Blessings of the Kingdom will come to those who make life-impacting changes now. Don’t put it off. “Someday” is not on the calendar.

We hope that our Article about Modern Worship was a blessing to you, If you Enjoyed it consider sharing us on social media (Facebook, Twitter Etc..)

Scripture study in the Spirit has led me to question the importance of the number 7 to Yahweh; and if Yah didn’t mean the literal 7th day and not the nominal Saturday.
Any thoughts?

We believe that Yahweh is referring to the literal seventh-day when speaking about the Sabbath. This was the day that Israel observed along with the Messiah and apostles.

Loved this. I am the “black sheep” of my family. I do not attend any fellowship and only listen to sermons on the internet because the errors of today make me so angry when I hear them. I visited my sister’s church and they have a rock concert with people drinking coffee and wearing skimpy clothing. Women look like they are ready for a nightclub. They teach from the bible and mostly twist Paul and teach how we are under grace now because it is impossible to obey Torah. It is full of educated pretty people and great families of… Read more »

We understand the struggle of not having anyone to fellowship with. Yahweh makes it crystal clear that he hates man made days of worship. (X-mas Halloween etc…). He has specific days that HE commands us to observe.

You are always welcome to come visit, fellowship and worship if you can ever make it to Missouri!