From where did the practice of wearing the kippah or yarmulke develop?

The Old Testament is silent on the wearing of the kippah or skull cap. It is also nowhere found in the New Testament. “Wearing of a head covering (yarmulka, skullcaps, kippah [pl. kippot]) for men was only instituted in Talmudic times (approximately the second century CE).” The Jewish Virtual Library So if the kippah is absent from the Bible, how was it adopted? The tradition likely goes back to Greek culture. Antiochus Epiphanes, the Seleucid emperor, made it his personal goal to force the Greek culture upon all of his empire, including the Jewish people. This is what motivated the Maccabean revolt and the rise of the Hasmonean Empire. In the year 175 BCE, Jason, of the Oniad family, was appointed high priest. As recoded in 2 Maccabees 4:7-17, he favored the Greek culture and vigorously sought to incorporate Antiochus’ policy of assimilation:

“When Seleucus died and Antiochus, who was called Epiphanes, succeeded to the kingdom, Jason the brother of Onias obtained the high priesthood by corruption, promising the king at an interview  three hundred sixty talents of silver, and from another source of revenue eighty talents. In addition to this he promised to pay one hundred fifty more if permission were given to establish by his authority a gymnasium and a body of youth for it, and to enroll the people of Jerusalem as citizens of Antioch. When the king assented and Jason came to office, he at once shifted his compatriots over to the Greek way of life.

“He set aside the existing royal concessions to the Jews, secured through John the father of Eupolemus, who went on the mission to establish friendship and alliance with the Romans; and he destroyed the lawful ways of living and introduced new customs contrary to the law. He took delight in establishing a gymnasium right under the citadel, and he induced the noblest of the young men to wear the Greek hat. There was such an extreme of Hellenization and increase in the adoption of foreign ways because of the surpassing wickedness of Jason, who was unholy and no true high priest, that the priests were no longer intent upon their service at the altar. Despising the sanctuary and neglecting the sacrifices, they hurried to take part in the unlawful proceedings in the wrestling arena after the signal for the discus-throwing, disdaining the honors prized by their ancestors and putting the highest value upon Greek forms of prestige. For this reason heavy disaster overtook them, and those whose ways of living they admired and wished to imitate completely became their enemies and punished them. It is no light thing to show irreverence to the divine laws—a fact that later events will make clear.”

As seen from the above excerpt, Jason made several radical reforms to the Jewish culture in an attempt to promote Antiochus’ policies of integration into the Greek culture. In his fervor to adopt the Hellenistic culture, he even changed his own name from Yahshua (possibly, Yeshua) to the more Grecized “Jason” (Josephus, Jewish Antiquities, book 12, chapter 5, p. 239).

In addition to neglecting the sacrificial offerings and establishing a gymnasium, he also introduced the “Greek hat.” There is general agreement that this hat refers to the hat of Hermes (a.k.a. Roman deity Mercury). Ancient depictions of the hat of Hermes are very similar to the modern kippah. The only notable difference was that the hat of Hermes often had wings on each side.

Whether this was the exact time that the Jews adopted the wearing of the kippah, there is little doubt that the kippah or skull cap arose through the adoption of the Hellenistic culture. Except for the High Priest’s turban, there is no command in the Old Testament to wear a skull cap. The only possible connection between the kippah and Old Testament is where Yahweh commanded Israel not to round the corners of the head in Leviticus 19:27. 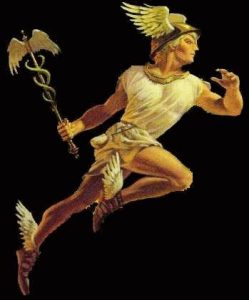 In reference to this command, Jamieson-Fausset-Brown Bible Commentary states, “It seems probable that this fashion had been learned by the Israelites in Egypt, for the ancient Egyptians had their dark locks cropped short or shaved with great nicety, so that what remained on the crown appeared in the form of a circle surrounding the head.” Interestingly, most kippahs are designed with this same circle design.

Besides its absence in the Torah, nothing is said about men’s headcoverings in the New Testament, except for Paul’s statement in 1Corinthians 11:7, “For a man indeed ought not to cover his head, forasmuch as he is the image and glory of Elohim.” If Yahweh commanded that men wear a kippah, why does Paul specifically command the opposite? The reason is obvious, the kippah is not rooted in Scripture, but in Greek culture.

As believers we must avoid wearing kippahs or following any man-made, heathen practice not ordained in Scripture. Our Heavenly Father has a disdain for synchronizing with pagan beliefs. Writing to Israel in Deuteronomy 12:30-31, He says, “Take heed to thyself that thou be not snared by following them, after that they be destroyed from before thee; and that thou enquire not after their mighty ones, saying, How did these nations serve their mighty ones? even so will I do likewise. Thou shalt not do so unto Yahweh thy Elohim: for every abomination to Yahweh, which he hateth, have they done unto their mighty ones; for even their sons and their daughters they have burnt in the fire to their mighty ones.”

For more info on the Kippah and its origins please check out our article: The Beanie: Torah or Tradition?