A sleeping giant has awakened. The Name of our Heavenly Father Yahweh is under ramped-up attacks from various WWCG “Worldwide Church of God” breakaway groups. Because of its unquestionable proof and rock-solid, historical fact, their members in large numbers are questioning why their leaders refuse to honor and teach the personal Name of their Creator Yahweh.

Herbert Armstrong himself used the Name Yahweh for about six months in his early Radio Church of God (before it became the Worldwide Church of God) broadcasts, according to an elderly former member.

In attempts to stop the bleeding, nervous leaders are amping up their efforts to discount their Creator’s Name Yahweh.  Regardless, His revealed Name is going out in power and in unprecedented ways. Any attempts to squelch it will prove futile, according  to Yahweh Himself.

The Book of Revelation tells us that His Name will be honored by the true Philadelphia Church (Assembly). “…(for thou) hast … kept my Word, and hast not denied my name,” Revelation 3:8. Scripture even issues this warning for those who refuse His Name: “If ye will not hear, and if ye will not lay it to heart, to give glory unto my name, saith Yahweh of hosts, I will even send a curse upon you, and I will curse your blessings: yea, I have cursed them already, because ye do not lay it to heart,” Malachi 2:2.

We are a ministry on the vanguard of “contending for the faith once delivered unto the saints,” Jude 3. Rather than resurrecting a defunct parent ministry that had stopped short of all the Truth, our goal at Yahweh’s Restoration Ministry is earnestly to contend accurately for every right teaching in Scripture. Truth is our concern, not numbers, prestige, funds, or founders. Our focus is also on common error. Most churches and organizations rest on their traditions or point to their founder and swallow everything he taught without solid verification in the Word. When someone says theirs is the only true church on the face of the earth, we must ask, have you really investigated every other one in existence? 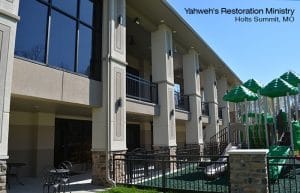 We invite you to get acquainted with us. We are a family-friendly, commandment-keeping ministry for all ages. We honor the Third Commandment, which is not to allow His personal Name Yahweh to be abandoned through the use of substitute titles. (God is not a name but just a label that was never used in true, biblical worship.) We also honor and call on His Son’s Name Yahshua. The name Jesus is Latinized Greek. He was neither Roman nor Greek but was born a Hebrew with a Hebrew name that means “Yahweh’s Salvation.” With this reality as a launch point, the sincere seeker will discover a whole panorama of amazing understanding built on the fact that his Christian faith should be Hebraic based, not steeped in the Roman church.

You have learned much truth from the Worldwide Church of God and it’s splinter groups, now discover what you are missing. [pdf-lite]

in acts 4 : 12 you said Yeweh was the only nome by which you are saved .But in the greek that is not the word used it is ee-ay-sooce or Jehoshua , which became in modern english Jesus . so explain how you get Yeweh . because clearly its not Educate me if i am wrong about that

As a firm believer of Yahweh’s name and Yahshua’s name, I wrote an email to William F. Dankenbring of Triumph Prophetic Ministries, explaining in detail that his insistence of using Yehovah in place of Yahweh, is totally wrong. I went through the explanation of what ‘hovah’ meant and that it carried the traits of Satan the devil (evil, extreme wickedness, perverse, etc), but he is so wrapped with Nehmemia Gorden (a Karaite Jew) and his Aleppo Codex, Leningrad Codex, and the Cairo Codex. According to Gorden, all three testifies that Yehovah is the correct, original pronunciation of God’s Name. Dankenbring… Read more »

I happened to meet Nehemia Gordon last FOT in Jerusalem. A nice man, but I was not impressed. He is a Karaite Jew and as such does not believe in Messiah, Yahshua. So what can he teach me, a born-again believer in Yahweh and Yahshua (for 33 years) who has been baptized in His Set-Apart Spirit which is my teacher?

The Westminister Codex uses Yahweh. You can download the program at:
scripture4all.org

How does one view the comments? All I see is a link to an article. Does this mean that the link is considered to be the comment? If so, how does it rate as 2 comments?

Comments can be added and viewed at the bottom of the post. Yes, links count as comments.

For me i am ready to stand at the side of the people who deeply want to uplift the name of our Creator YAHWEH that was hidden by the devil for long time. I believe i will be one to be a member. Do you have a church here in Australia? Since May 2018 that is the time i started speaking loudly in the church that we call our Creator the name of Baal ( god or lord). Now it is like a terrible conflict among believers. Some do not want to call our Creator Yahweh. Always claim that His… Read more »

We do not have any contacts in Australia, You are welcome to use our website for resources etc… We broadcast live Sabbath services every Saturday at 1:30 PM (Central Time) You can watch here yrm.org/live

Tje name Of thhe Creator is Yahweh not Yehovah. Include me in this discussion

Greetings. As a former member of Worldwide and “member” of a splintered group, I have felt and experienced the pain of numerous men splintering off. Even the so called splinter groups from WCOG have splintered. I like to think that the bottom line is: the Family is breaking up. Over and over. And over. Quite frankly Gentlemen I not only resent my spiritual family being splintered, but Yahweh and Yahshua do as well, do They not? They hate divorce, and they HATE dissension of brethren. They also hate pride. I direct these specific statements to my very own elders, dear… Read more »

Thanks for reaching out to us! Yes, the splintering off of groups is always tough to see and live through, However. It is because of those splinters and fractures that we have been able to do what we do. Sometimes the road that leads us where we are is one fraught with misery and despair, but we are ever grateful to Yahweh that we have been able to reach as many people( like you) as we have. We are humbled to be in His vineyard doing the work. Sadly, these are not new problems plaguing the assemblies. I’ll try to… Read more »