Our Outreach Growth Continues
Yahweh is blessing our outreach as YRM videos are furthering interest in truth in a big way. For example, in just a few days a sermon last year by Elder Alan Mansager on the pagan origins of New Year’s has earned 600 subscribers and 50,000 views, representing over 7,000 hours of watch time. In the next 12 months we will be adding more captivating video programs for Yahweh’s glory. Watch Here>>

Annual Donation Report Coming
We will soon be sending your annual donation summary for 2019, along with a report on all that has been accomplished this past secular year. This was one of the busiest years for YRM, with many advances both in outreach and building and facility improvements. Of course, none of it would have been possible without our faithful supporters, for which we thank Almighty Yahweh.  With your help we look forward to greater progress in 2020. 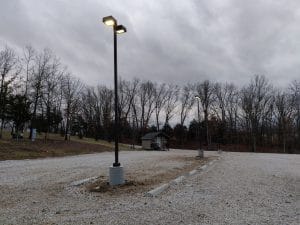 Parking Lot Lighting Completed
YRM offices got a facelift this week with three street lights added to the parking lot. Ten volunteers, led by Bros. Ryan Mansager and Chris Fouts, installed the lighting in an eight-hour marathon. The 25-foot poles were raised and set on concrete pillars by muscle power with ropes and backhoe assisting. We thank Bro. Chris and son Andrew who traveled from Virginia to help install and connect the lighting, along with Bro. Mel Braun and son David from Michigan.

TEST YOUR TUTELAGE
The sacred Name Yahweh should be pronounced Yahuweh.

Rules of Hebrew grammar conflict with the Yah-u-weh (and Yehovah) pronunciation. If the Name were “Yah-u-w-eh” it would have 5 vowel-consonants, thus making it not a four-letter Tetragrammaton but a five-letter Pentagrammaton. We also never see a dagesh forte (letter doubling) in the Hebrew Tetragrammaton. The grammar would dictate two waws to make the “u” and the “w” sounds respectively. Breaking it down it would look like this: YHWWH (Y = Yod H = Hey U = Waw W = Waw H = Hey). From the oldest texts on down there is no case of the Name ever written with five Hebrew letters. This same rule must be applied to Jehovah/Yehovah. You cannot simply attach extra letters and syllables to a word without the necessary grammatical and lexical support. The Tetragrammaton vowel marks were purposely combined with Adonai or Elohim to hide the name. In Hebrew in the preponderance of cases the last syllable is where the accent was placed, not the middle one. To over-emphasize a middle syllable (YahUweh) would be a total guess unsupported by standard Hebrew grammar.